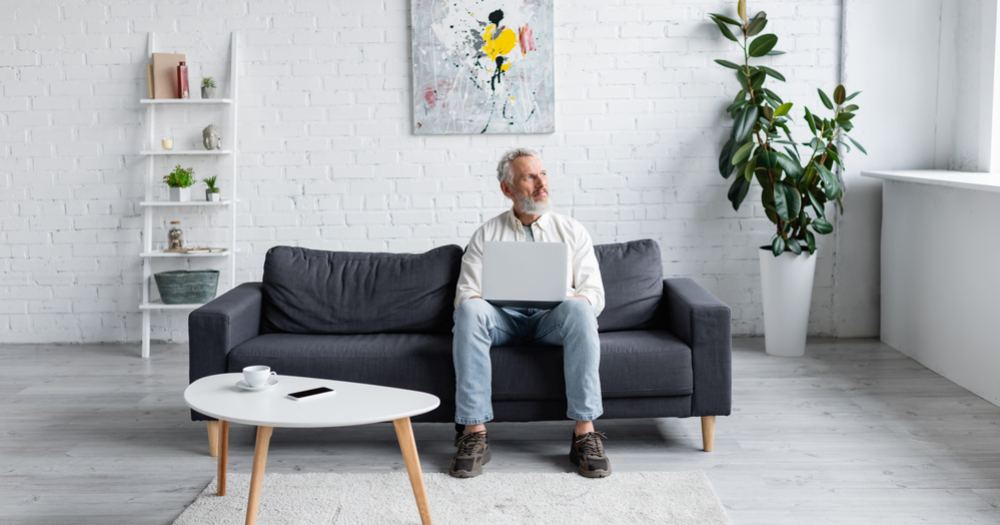 Pulling the sofa away from the wall is one of those things many interior designers suggest. But, as that’s usually the case, it’s easier said than done as this opens a new space behind the couch. From that point, you start wondering how you can use that extra space that is there, seemingly useless.

Don’t sweat over it my friend. We did the research and here are 7 things you could place in that space (it even rhymes) to make it look cool and to get an extra functionality in the home:

First, let us make this clear – the shelf anywhere is rather useful, but placing it behind the couch makes even more sense. And this is especially true for heavy readers who like to have their favorite or books on their “to read” list close by.

As an added bonus, a shelf behind the couch could also look good as it can naturally fill the walls. The best looking shelf for this setup, as far as we’re concerned, will have a subtle design, letting the couch be in the spotlight. It will be there in the back, filling up the gap between the couch and the wall, while doubling as a small storage area for books, magazines, your iPad and so on.

This is another no brainer when you think about it. A sofa table — which is different from a console table — looks like it’s designed to be placed behind a couch, even though we saw some websites using the two terms interchangeably.

The main thing to look for when selecting a sofa table is its length, which should not be less than half the length of the couch/sofa. This way, you will get an optimal look and feel — or so I think. On the other hand, you can perhaps “get away” with two smaller sofa tables if you can make them fit nicely.

We’re all for a single, slightly larger table – but it’s your home and we’re sure you know what better fits your needs.

3. Storage With a Console Table

While we prefer a sofa table, we do like the idea of combining a console table with a (small?) storage unit for an extra utility.

Console tables come in a range of styles and prices, and you can use them to create some extra storage space behind the sofa. You can go for a console with open shelves, if the space is small yet you want to have that uncluttered look and feel. This will also give you some space to display a few decorative pieces.

On the other hand, if you have more room behind the couch – get a console table with closed shelves. Its main benefit is that it’s easier to maintain with no dust to clean every now and then.

Finally, when it comes to size, designers suggest going for a console that is about two thirds of the sofa’s width.

4. Mirror or a Piece of Art

This one’s tricky as we have seen just a few mirrors placed nicely behind the couch, as it seldom serves its purpose. Simply put, it’s not the place people in the home will look at themselves — or so we think.

In that sense, a mirror would serve as a piece of art, which could be better placed above (and behind) the couch. As a utilitarian, this isn’t my number one choice but I do understand you may look at it differently.

Another tricky design that could look awesome if done right. The problem is to be done right as we haven’t seen that many good photos of a bench behind the couch. Perhaps we’re looking at all the wrong places, but when you think about it – this one’s hard to imagine.

But don’t that be your limiting factor. If you need extra sitting space in the room and could make it look nice – go for it.

For an added look, consider placing tuck baskets or a floor lamp next to the bench. And if possible, get a bench that doubles as storage so you will also have some extra space for your stuff.

If you can squeeze a bar table behind the couch, that could be awesome. It could be your dedicated drinking space where you could savor that wine you’ve been saving for some good times. Or just when you need to wander off and think about something nice with a glass of wine in your hand.

These days, bar tables and bar carts come in different sizes and designs and it will be up to you to find the one that will fit your own space. The main thing is to imagine yourself sitting there after a long work day and relaxing a bit.

Something completely opposite from the previous section is the small home office, which may be added behind the couch. We don’t know how much space you have there, but if you do need to work from home from time to time – this could be the place where you could finish things from the comfort of your house.

Since in most cases you won’t have too much space to play with, you will have to go for the highly functional furniture and perhaps get one of those foldable tables. Or get the one that could serve both for your business needs as well as for anything else — like when you want to get a glass of wine. This way, you can create a two-in-one combo that is a bar cart and a tiny home office. Sounds like a dream, doesn’t it?

Reclaim the Space Behind the Couch

We don’t think the space behind the couch should be left empty. If you have some space there, consider putting it to good use. You don’t necessarily have to make it useful, but by all means – make it look nice. And try to combine the form with function.

To that end, we suggest checking out Wayfair’s website as we have seen some very cool solutions there. Before you know it, your space behind the couch will be fancier and more useful than ever. 😉