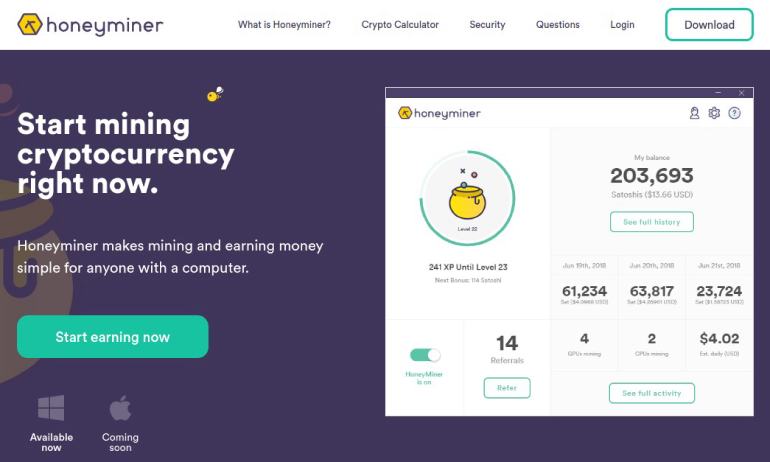 There’s a new software out there that lets everyone with a Windows PC join the “mining party” and be rewarded in Bitcoin. It’s like joining the early days of cryptocurrencies when Bitcoin mining was possible with regular computers — but with a twist.

For starters, if you sign-up for the service, you won’t be actually mining Bitcoin, but other cryptocurrencies. Nonetheless, you will be paid in Bitcoin, meaning that it will be easier to turn those earning into good ol’ cash. Let’s see what this is all about, shall we?

The New Jersey-based crypto mining startup Honeyminer launched a free beta of its software in June and has since managed to garner more than 10,000 downloads. It allows users to participate in a mining pool by running the app when the computer’s graphics processing unit (GPU) isn’t in use for processing images or videos.

Honeyminer is focused on mining GPU-friendly cryptocurrencies such as ethereum, ethereum classic, zcash, monero, and so on. The algorithm automatically switches between different currencies every 10 minutes or so, depending on block size, if there’s a sudden change in the currency’s mining profitability.

Then, at the end of the session, it sends the participant’s earnings, converted into Bitcoin, directly to the user’s wallet.

“We are pooling people together to find those block rewards faster. Together, we have a larger hashrate,” Honeyminer co-founder Larry Kom told CoinDesk. “Not only do we connect you to the blockchain and anonymize you through us, but you also are contributing to what is, in essence, a pool.”

In other words, Honeyminer offers new opportunities for people who want to acquire bitcoin but have limited access to cryptocurrency exchanges. It could also broaden the range of participants in cryptocurrency mining, which over the years has had its barriers to entry rise — with specialized hardware giving large, professional operations an edge over hobbyists.

“The miner doesn’t have to do the math or manage all the configurations and settings, or manually check the prices,” said Honeyminer advisor Noah Jessop, a venture capitalist at Founder Collective in San Francisco. “We make it so that any surplus compute, so any laptop you aren’t using all the way up to a rig that you run is automatically doing the most profitable computation.”

Not the most profitable way to mine cryptocurrency

While Honeyminer does sound appealing, it is important to add that it is not the most profitable way to mine cryptocurrency, given broader market volatility compared to bitcoin and Honeyminer’s cut, which ranges from 2.5 percent to 8 percent depending on the quality of the user’s hardware. It is said that someone with a few high-end GPUs could expect to earn bitcoin worth a dollar or two from running the software almost all day.

Nonetheless, it is arguably the easiest way to mine for crypto out there, and the one that could be very appealing to users in emerging markets. In fact, the company said that 18 percent of users hail from developing nations.

“If you hear about crypto and you want to learn, you can either go out and pay real cash money,” Jessop said. “Or you can download a program in 30 seconds and start earning your own crypto, for free.”

Not everyone thinks it’s a great idea

One of them is David Vorick, CEO of Nebulous, which operates Siacoin and the mining equipment manufacturer Obelisk. According to him, Honeyminer won’t change the broader ecosystem beyond attracting more curious newcomers. He also sees the closed source of the Honeyminer software as a potential problem, though that could change in the future.

“That actually increases centralization, because all you’ve done is moved the power from the mining pools or users who have to be advanced, to software toolkits,” Vorick told CoinDesk. “Basically all the power lies with the devs of the software.”

A different issue he sees is in the GPU mining itself, which Vorick believes, could almost entirely disappear over the next two years, with general purpose ASICs [mining hardware] taking over most of the mining processes.

The Honeyminer team recognizes some of the issues and is working on adding new features for different types of users.

One of the features would allow newbie investors to receive their earnings directly to wallets on third-party platforms like Coinbase. On the other hand, for what they refer to as “professional miners,” a specialized version called Honeyminer Pro will be released with additional features, such as power consumption management and options for manually choosing which cryptos to mine.

All said, and despite its critics, we think Honeyminer is onto something. Even if people in the West choose a different method for making money, those in developing countries could find it useful for earning some extra money on the side. And at the end of the day, they will provide enough processing power to keep the mining going.